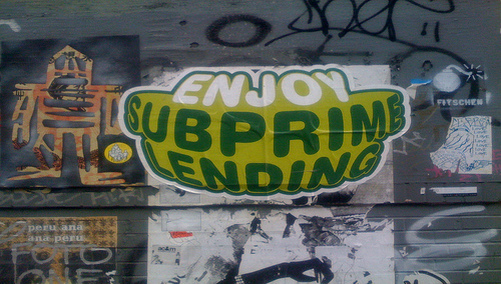 The subprime lending boom that took place from 2001 to 2006 did little to boost homeownership, according to a study conducted by the Federal Reserve Bank of St. Louis.

Instead, subprime loans served as little more than temporary bridge financing, as most were prepaid (via refinance or sale) or defaulted on within just a few years after loan origination.

“The termination rates of subprime mortgages that originated each year from 2001 through 2006 are surprisingly similar: about 20, 50, and 80 percent, respectively, at one, two, and three years after origination,” the report said.

In the early years of subprime, borrowers were able to refinance out of the loans thanks to surging home price appreciation, but once the music stopped, the high-cost loans turned into record defaults.

The delinquency rate, default, and foreclosure rates of subprime loans originated in 2006 and 2007, when the market began to turn, were three times higher than in earlier years, when appreciation masked a lack of affordability.

The report found that approximately five million home purchases were financed with subprime loans between 2000 and 2006, with slightly more than one million loans going to first-time homebuyers.

The study concluded that subprime lending, at most, accelerated growth of homeownership, by placing borrowers into bad loans earlier on, which were eventually refinanced into more sustainable loans or defaulted on.