Subprime Lending Volume Over the Years 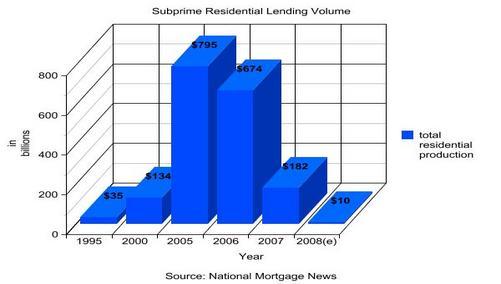 As I’ve mentioned numerous times before, there were a number of problems that led up to the current mortgage crisis.

One was the explosion of subprime lending, which saw production spike during the end of the housing boom between 2005 and 2007, before ultimately coming to a standstill.

As illustrated by the graph above (data courtesy National Mortgage News), you can see that subprime lending volume was relatively modest in 1995 and 2000, but surged in 2005 and 2006, before easing in 2007 and completely dropping off this year.

Subprime originations, defined as A- to D loans, including some other “non-prime” mortgages, totaled just $35 billion, or 5.48 percent of the $639 billion in total residential mortgage production in 1995.

Five years later, subprime loan origination volume grew to $134 billion, but still only accounted for 12.56 percent of the $1.1 trillion in total residential production.

In 2005, subprime lending shot up to $795 billion, representing 24.13 percent of the $3.3 trillion in total residential home loan lending volume.

A year later, production fell to $674 billion, but still accounted for more than 20 percent of the $3.3 trillion in originations.

However, conditions changed quite abruptly in 2007, as subprime lending volume totaled just $182 billion and accounted for only 6.95 percent of residential production.

It’s forecasted that 2008 subprime originations will total just $10 billion, making up a mere 0.58 percent of the estimated $1.7 trillion in total residential lending volume.