As the mortgage industry becomes less profitable, and perhaps more burdened with regulations and paperwork, lenders may increasingly offer alternative products to avoid the red tape and boost profits.

There are also the disruptors, who are changing the way we look at the traditional mortgage.

While it’s unclear if this will become a major trend, or just limited to a handful of offerings, it’s important to know what you’re really getting when you apply for a non-mortgage loan.

Similar to a Mortgage, But Not

Lately, some companies have unveiled new loan products that look like mortgages, but aren’t. And there are some key distinctions to take note of to ensure you actually get what you’re looking for.

Earlier this month, a California lender by the name of LoanMe launched two loans that work as alternatives to standard mortgages. In their press release they highlighted the fact that you don’t need to be a homeowner to qualify.

One option called the Small Business Premier Loan allows small business owners to borrow up to $250,000 without tapping their home equity. This offer was likely borne out of necessity seeing that many homeowners don’t have equity to tap these days, at least not $250k.

In the good old days everyone had equity to tap, often up to 100% LTV or higher, maybe even 125%. But lenders are a lot more conservative these days for good reason.

Unfortunately, interest rates on that product start at 14.9% and origination fees begin at 7.5%.

Another LoanMe product called the “Second Mortgage” Look-Alike Loan allows homeowners and non-homeowners alike to get up to $100,000 to spend on stuff they’d normally spend on with a traditional second mortgage.

However, no equity is tapped and the home isn’t used as collateral. These loans start at 9.9% with APR as low as 11.39%. The upside is they are fixed and you can get the funds as quickly as the same day.

The downside is the rates tend to be much higher than a traditional second mortgage. Additionally, you may also be able to write off interest tied to a standard home equity line or loan.

Other mortgage companies like CashCall and SoFi offer these types of loans as well alongside their traditional mortgage products.

Sell Part of Your Home and Continue to Live In It 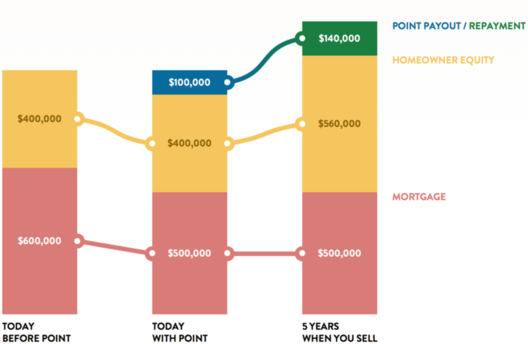 Then there’s a new company called Point, which gives homeowners the opportunity to “unlock the wealth in their home” by selling just a portion of it, not the whole thing.

Per Point, the homeowner sells anywhere from 5% to 10% of their home’s current value to the company in exchange for cash sans a monthly payment, kind of like a reverse mortgage.

The company then records a Deed of Trust on the property and once you sell the company is paid back, with a certain amount of appreciation.

So essentially they’re banking on your home’s value going up, which is their investment. They use third-party appraisals (which you pay for) at the time of application and when you pay them back to determine said value.

The amount you sell them is exchanged for some percentage of future appreciation. Point uses an example of 10% of your home’s value today for 20% appreciation later.

If you don’t sell within the term, which I believe is 10 years, you must buy back Point’s stake at the then current appraised value.

It’s also possible to refinance your property to buy back their stake before the term ends. It’s a unique proposition, but you might be better off making a monthly payment on a traditional mortgage instead.

The mortgage world is certainly getting more complex as new players emerge and challenge the status quo.

So be sure to compare all your options to determine what works for your situation. In the end though, the good old-fashioned mortgage might still be the best alternative out there.