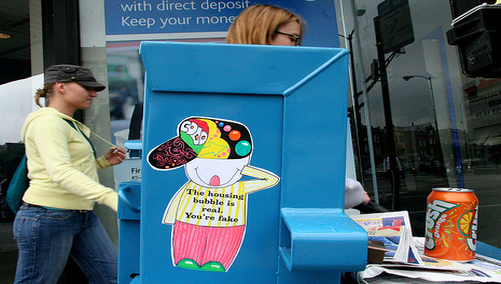 As if things couldn’t get any worse for BankUnited, its stock trading at a mere 32 cents, its regulator demanding it raise a hefty amount of capital, and now this.

The Coral Gables, Florida-based bank and mortgage lender was the victim of what they say was a fake press release, involving a handful of companies claiming to be working with BankUnited on loan modifications.

The press release claims, “BankUnited through Eagle Nationwide Mortgage Company’s affiliate offices, along with Ryan Boyajian, President of Mortgage Modification Legal Network, announced a partnership to stop foreclosures and move homeowners into loans that both the bank and the homeowner can comfortably live with.”

However, just hours later, a BankUnited spokesperson said the release was false and that the bank had no agreement in place or any intention to sign one.

It turns out Eagle Nationwide Mortgage was simply an approved broker with BankUnited when it launched its loan modification program, while “MMLN was never approved to work with BankUnited in any way.”

The spokesperson even noted that the quote attributed to Eric Darmanin, Senior vice President of BankUnited, was fake (perhaps the use of exclamation should have tipped us off).

BankUnited has requested that Business Wire remove the press release, though it still appears to be available via Marketwatch.

A month later, the OTS reclassified the bank as “adequately capitalized” and demanded that it terminate its option arm lending program and raise at least $400 million in capital.

The future is still unknown for BankUnited, but it’s hard to say it looks bright.

Update: Monica Peterson, an outside spokeswoman for MMLN, said the company obtained permission to run the release, but not the quote from Darmanin.

She added that MMLN is working with Eagle Nationwide, but not directly with BankUnited, and apologized for the confusion.