Sales Volume, Not Home Prices the Concern in a Rising Mortgage Rate Environment

A lot of homeowners are understandably worried that rising mortgage rates will dampen their home’s value, or make it more difficult to fetch a high asking price, but that theory has been debunked several times.

I recently wrote about how the ~50 basis point jump in rates (now closer to 75 bps) was the equivalent of a $16,400 home price increase for prospective buyers.

On the surface, this tells us that home prices are more expensive, even if they stay flat, which should reduce demand and lead to a drop in prices.

But that’s not what history has shown us. Instead, home prices continue to rise in spite of rising interest rates, generally because of a more robust economy.

Duncan points out that in the 1970s, when mortgage rates climbed into the teens (12%-14%), home prices “actually rose, but the number of homes sold fell dramatically.”

He adds that the “core relationship is between the activity level and interest rates.”

Another example he cites is the taper tantrum that occurred during the second half of 2013, which resulted in a 110-basis point mortgage rate rise during a six-month period. It led to a 10% decline in home sales in the first half of 2014, but home prices still increased.

There’s also positive sentiment when the economy is humming along that leads to continued home buying at higher prices.

And at the moment, sales volume hasn’t even slowed, this according to a report today from Zillow.

The company said purchase mortgage requests on its website maintained their pre-election levels, despite the largest weekly mortgage rate increase since 2013.

That’s pretty impressive, though it could have something to do with panic buying. We might need a longer timeline to see if the trend holds up.

They added that refinance requests on the site were down a whopping 32% compared to early November, which is no surprise seeing that they’re without a doubt more rate-sensitive than purchases. 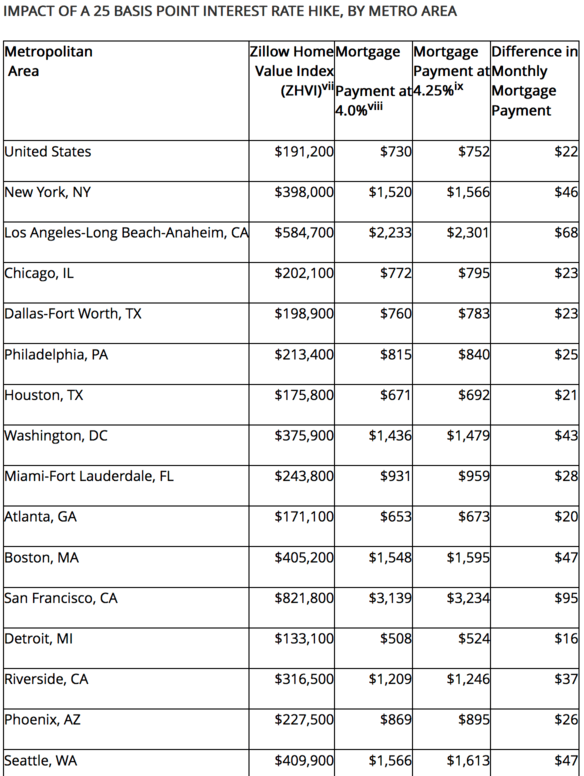 One reason purchase requests may not be down is simply because the rate jump doesn’t equate to a huge hit to the pocketbook.

For the median U.S. home valued at $191,200, a further 25-basis point jump from 4% to 4.25% only costs the hypothetical home buyer another $22 per month. That isn’t enough to make or break a purchase decision for most folks.

However, in more expensive markets like San Francisco, a .25% increase in rate equates to $95. But again, wealthy tech employees can probably absorb another $100 or so.

I should point out that most home buyers have trouble with the down payment, not the monthly payment, so rate increases aren’t of major concern. I’d actually be more worried about rising prices that require more cash at closing.

Home prices are still expected to rise 3.6% in 2017 despite the upward pressure on mortgage rates, this according to more than 100 economic and housing experts surveyed by Zillow.

In other words, don’t get your hopes up that prices will fall just because your monthly mortgage payment got more expensive.

The increase in rates will likely just hurt the mortgage industry, namely those lenders that rely mainly on refinance activity to generate business.

It’s why we continue to see mortgage lenders focusing on the purchase market, with newcomers like Motto Mortgage emerging, and companies like Caliber Mortgage launching the so-called Ultimate Homebuying Experience.

previousFairway Mortgage App: Close Your Mortgage with Your Phone
nextFannie and Freddie Launch Flex Modification Program: No Paperwork Required in Some Cases